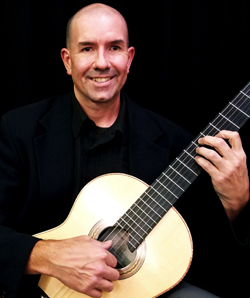 His works include pieces for orchestra, string quartet, chamber ensembles, choir, film, and theater that have appeared at the Berlin Philharmonic, the San Jose Chamber Orchestra, the de Young Museum, the National Steinbeck Center, the subZERO festival, and many film festivals including the Burbank International Film Festival and the San Jose International Short Film Festival.

Scott has performed in large and small venues as both a solo artist and in groups playing many styles of music on a variety of instruments from electric guitar, bass, drums, and cello to the Greek bouzouki and Afghan rubab.  His primary instrument is the solo classical guitar.  He also concentrates his time to the study and performance of folk and world music.

All of these experiences are brought into lessons with Scott.  He encourages every student to explore everything that music has to offer while focusing on simply sounding great.